When Rebecka Ekström arrived in St. John’s just over a year ago, she was a stranger in a strange land.

The 20-year-old Stockholm native was in town to play basketball for the Memorial University Sea-Hawks, but had no prior knowledge of her new home. 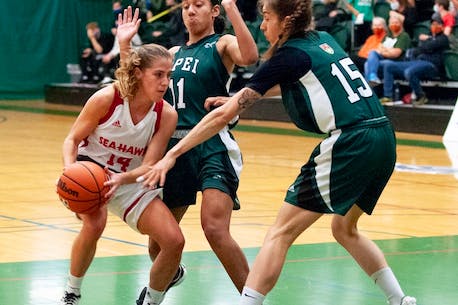 Ekström had never heard of Newfoundland and Labrador or its capital before the Sea-Hawks called on his services in February 2020.

Being able to travel for college while playing sports has always been a dream for her, and it was something Memorial was going to give her.

“It all sounded very interesting and felt so good,” Ekström said.

Coming to St. John’s in the midst of a pandemic has come with some sacrifice on her part. His first season was without any Atlantic varsity athletic competition. All the team could do was practice.

It meant a lot of time to get to know his teammates, get used to the city and focus on the lessons. It was also an opportunity to make a great first impression on head coach Mark English and his coaching staff.

Upon arriving in St. John’s, Ekström had to self-isolate for 14 days in one of the dorms on campus.

That was all English needed to know about their new player and what she could bring to the roster.

“She told me how tough she was just during that,” he said.

The first time English saw Ekström was on a computer screen. He is subscribed to a European recruitment service and part of the Ekström gang appeared in a video package sent to him from Stockholm.

What English saw was enough for him to contact the five-foot-eight Combined Guard and see what interested him in coming to St. John’s. It was before the 2020-2021 season, and he told him that there was some turnover at the guard position.

If Ekström came to Memorial, there would be an opportunity for her to come and compete for playing time.

This sparked Ekström’s interest, and in February she committed to St. John’s.

“It was something totally new and exciting and I knew straight away I wanted to do this,” she said.

With the COVID-19 pandemic, she didn’t have to come to St. John’s, as competition was suspended.

Ekström had the option of postponing her arrival, but she made the decision to come anyway.

English says he’s been amazed by her growth as a player. The year Ekström spent in the city without AUS competition allowed her to adapt to a new country and a new city, while having the chance to familiarize herself with her teammates and basketball on this side. here from the Atlantic.

During this year, Ekström was constantly in the gym and improving. These practices helped her improve her defense and hone an already consistent shot.

“It really helped her grow with us,” English said.

It helped so much that English made the decision to slide her into shooting guard to make the most of her shooting ability.

That work has also helped the Lady Sea-Hawks go 8-6 since returning to action last fall. Ekström has been a big part of the team’s solid play as it heads into the final weekend of the Atlantic University Sport (AUS) regular season.

She is averaging 14.2 points and 1.7 assists for her club, while drawing rave reviews from her manager.

“What she’s doing as a rookie is not normal,” English said.

For Ekström, the return to competition at the start of the season represented a return to a certain normality.

She could play as a Sea-Hawk, which first attracted her to St. John’s, and fully experience being a student-athlete.

“It’s so good to come back and play again, and most of the games have been really competitive,” Ekström said. “Our team gets along well, and that chemistry has translated to the pitch and given us success so far.”

Yet there was another challenge on the horizon. The spike in COVID-19 numbers in the province in late December delayed the return from the Christmas holidays and postponed in-person activities for an additional month.

This meant canceled matches for Ekström and her teammates. It also meant that workouts were left to one-on-one training and classes were online.

She decided not to go home for Christmas because of the restrictions and the 8 p.m. flight to Sweden.

“The COVID-19 outbreak and the start of the restrictions happened suddenly, and it was hard to adapt after having such a good first half,” she said.

The Sea-Hawks returned to action in mid-February, and Ekström was back to doing what she loves on a basketball court, pushing the ball downfield and shooting the ball deep.

However, the recent break has taught him something important.

“I’m very grateful for this experience because it taught me to be grateful for the little moments in life,” Ekström said. “Playing basketball with my best friends, participating in class conversations, traveling and going out to eat and do activities.”